Cal Rayborn - "Cal's Harley" with 1969 Daytona Speedway in the background 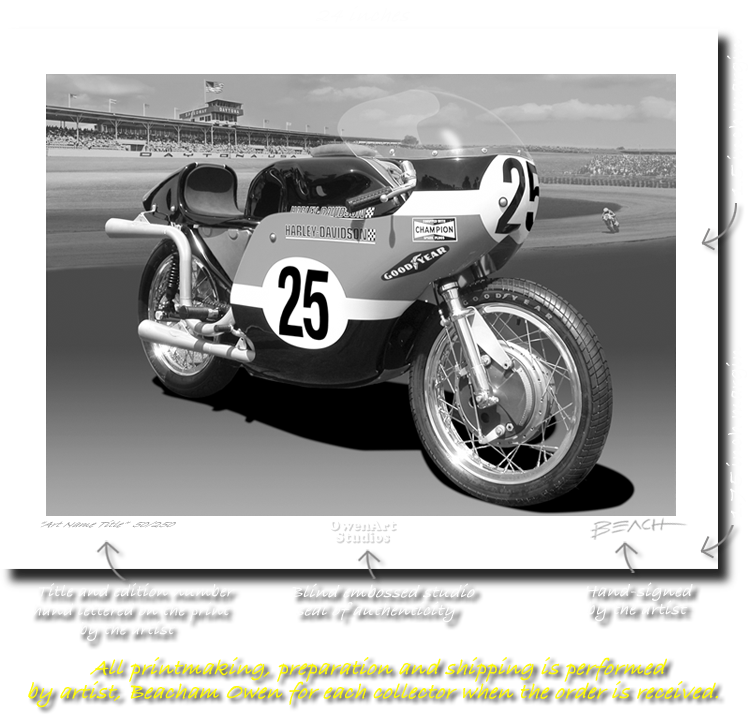 Reproductions are individually produced by the artist and hand-signed for each collector. All are premium-quality, archival, limited editions.

The story:
In 1969, the Japanese manufacturers came to Daytona in full force with their light and agile two-stroke machines. The pole winner was Yvon DuHamel on a Yamaha. Nine of the top-ten qualifiers rode two-stroke powered grand prix motorcycles. Cal Rayborn qualified eighth with the factory Harley-Davidson KRTT 750 "flathead" and was the only four-stroke motorcycle among the top qualifiers.

During the race Rayborn’s riding talent and the older-designed, bullet-proof Harley kept him with the faster leaders. A 200-mile race even today is an endurance race, and one by one, the two-stroke riders experienced mechanical problems or falls, while Rayborn ran fast and steady, took the lead and charged ahead for his second straight Daytona 200 win on the big Harley.

In December of 1973 Cal Rayborn died in New Zealand when the Suzuki TR500 he was racing at Pukekohe Park Raceway seized and threw him into a guardrail at well over 100 mph. He was just 33 years of age when America and the world lost one of its greatest racing talents.
This unique photograph depicting Cal Rayborn's 1969 Daytona 200-winning Harley-Davidson KRTT with the old Daytona Speedway grandstands ghosted in the background is the epitome of the glory days of AMA motorcycle road racing.

Calvin Rayborn II will be remembered as the rider who gave Harley-Davidson some of their greatest wins during the final days of the Company’s AMA Grand National road racing efforts.

★ HAVE QUESTIONS?
...I answer the phone & give information.
--Beacham Owen

Search This Site...
will take you to category 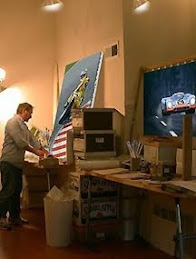 ABOUT our fine-art reproduction process

We use only premium-quality archival pigment inks and dyes (a 7 to 10-layer print process) on the finest matte and canvas material
••••••••••••••••••••••••
Each of our reproductions take 30 to 45 minutes to produce, then it is hand-coated (canvas), hand trimmed, signed, numbered and UV protected.
Properly displayed they can be enjoyed Fade-Free for HUNDREDS of years.

All art reproductions and photo prints are hand-produced at our California studio by Beacham Owen for each purchaser/collector.